An incomparable view of the Dolomites, from the Civetta to the Marmolada, from the Sella group to the Tofane.

Monte Pelmo is usually approached from Zoldo or Cadore. Here we suggest you reach Villanova (a hamlet of Borca di Cadore) by car and leave your car at the Tiéra car park (1,200 m altitude).
Take trail 468, in the direction of Ponte Intra Les Aghes bridge and Val de Foràda valley (the name “intra les Aghes” is curious: the “s” of the plural is typical of the Ladin language and derives directly from ancient folk Latin).
You can then reach Forcella Foràda col at an altitude of 1,977 m, in about 1 hour and three quarters.
From here, take trail 480, which climbs up to the Forcella della Val d’Arcia col.
The first stretch of this path crosses the scree field of the Val d’Arcia valley, climbing up the right side of the valley.
Actually, the “Dolomiti di Zoldo e del Cadore” sheet 025 1:25.000 indicates that the trail climbs up the left side of the valley.
The choice turns out to be better, since the final stretch of the path on the left side (looking towards the “mountain”) appears to be much steeper.

Beautiful! Up to now, you have had a privileged view of the Sella, the Civetta, the Marmolada, the Tofane, and the Lastoi de Formin.

You arrive at Forcella della Val d’Arcia col at an altitude of 2,476 m, after a 2 and a half hour hike from the start at Forcella Foràda col. Now the scenery changes, with a view of Mount Antelao, the Boite valley with San Vito di Cadore, Borca di Cadore and the impressive expanse of forests that extend on the slopes of Monte Pelmo, up to Monte Rite, with a view of Cibiana di Cadore and Monte Duranno.

Let’s go on! The path descends rapidly along the scree of the gully and then joins a ledge that winds at a high altitude, towards Rifugio Venezia hut.
This section has exposed points, equipped with steel ropes.

The last stretch runs on the scree field making you go down quickly and arriving among the dwarf mountain pines that surround the Rifugio Venezia hut (1,946 m.), which you reach in just over an hour after having left the Forcella della Val d’Arcia col.

The route is very interesting and allows you to see most of the Dolomites all in one go. Even the environment of the Dolomites itself can be observed at close contact. Val d’Arcia valley encloses a snowfield with a glacier moraine up to the red colours of the rocks of Forca della Croda Rossa pass.

The hike at a glance

Departure: in this sheet we describe the route from Tiéra (above Villanova di Borca di Cadore), towards Forcella Foràda col to Refugio Venezia hut, and the way back to the same point.
Time: 7-8 hours.
Difficulty: the total difference in altitude of almost 1,300 meters requires good training; due to exposed stretches it is recommended for experts.
Trails: marked.
Of interest: the route is like an open book on the Dolomites, its landscapes and naturalistic aspects.
Updated: August 2015. 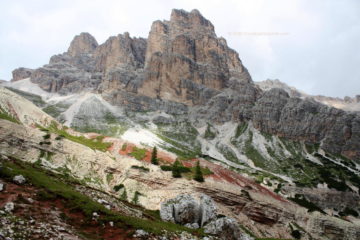 Images of the hike to the Val Travenanzes

Read the route description of this hike.

Hike to the Cinque Torri and Trenches of the Great War

Hike to the Cinque Torri and Trenches of the Great War The climb to the 5 Torri can be done on foot from different points: from the Falzarego pass, for example, or from the station Leggi tutto…

Hike to Prato Piazza, Dolomites The starting point is along main road 51 between Cortina d’Ampezzo and Dobbiaco at Cimabanche. Take trail 18, which crosses the lower part of the scree cone coming down from Leggi tutto…